The premier bicycle race in the Americas, the USA Pro Cycling Challenge, takes place in our home state. Spanning seven stages, 600 miles and a large portion above 10,000 feet, this is one punishing race. It only seemed fitting that Johnson & Held would be asked to make several belt buckles for the stage winners over the years.

In 2012, the city of Colorado Springs asked for an extra large belt buckle for the winner of their stage. We incorporated the Pro Cycling Challenge’s logo, black onyx and vibrant colors. The winner was presented the buckle by Colorado Springs’ Mayor and we are think it might have weighed more than the winners bicycle. 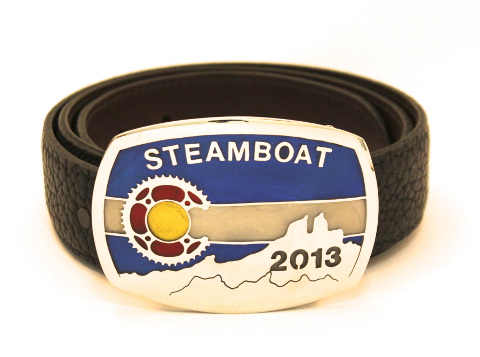 In 2013, the Challenge started its 4th stage in the town of Steamboat Springs on its way to a 166km trek to Beaver Creek. Regarded by many as the hardest stage of the race, this is a real bruiser of a day. The historic western wear store, F.M. Light and Sons, commissioned Johnson & Held to design and make a belt buckle for their stage winner. We used the majestic scenery of Rabbit Ears Pass in front of a Colorado state flag that was modified so the “C” was a chain ring.

Janier Acevedo, a Columbian bicyclist who rides for Jamis-Hagens Berman went on to win the stage. Not only did he go home with a tremendous accomplishment, but he took home an awesome buckle.

The route and dates for next year’s race have just been announced (http://usaprocyclingchallenge.com/). We hope to see you out on the course. And if you want a bicycle inspired belt buckle, check out some of our designs.